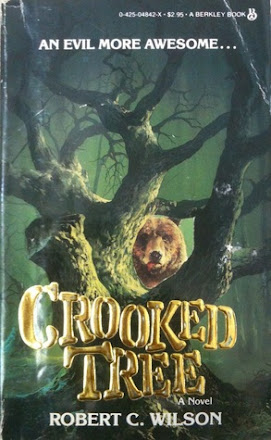 Across the cultures, there abound tales of people transforming into animals and stalking the wood.  Such tales have been used to illustrate the duality of humanity... and simply to make you feel uneasy walking in the woods...

Campers have been found mutilated in the woods near an Indian Reservation.  Legends about a spirit that transforms people into bloody thirsty bears are being whispered... and one man races to save the soul of the woman he loves from an ancient evil...

"Crooked Tree" isn't that bad of a book.  It's not great, but is a decently diverting read.  The story has a good flow to it, and follows a fairly simple and logical progression of events, while still having a nice building of suspense throughout it.  The characters are interesting, relatable, and actually have roles other than gore fodder.  The characters aren't wasted, and used quiet well.

I loved the idea of using an old legend of the First Nations as the premise for the story.  It added a nice depth and texture to the story.

While I may not necessarily re-read this book, I would certainly recommend it for at least one reading.  I'm going to put "Crooked Tree" in "The Bad"