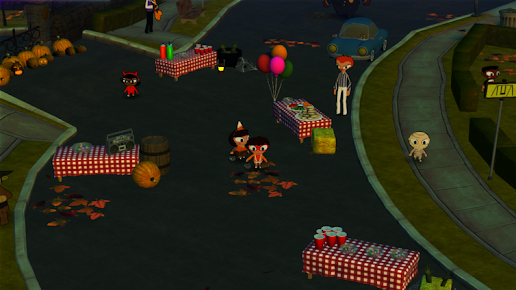 A big part of Halloween is trick or treating- making and donning a costume, pretending to be someone (or something else), going door to door, and gathering candy.

As such, it's only appropriate that a couple of days before Halloween itself, I review a game about costumes and trick or treating.

You and your twin head out to trick or treat- looking forward to collecting a bountiful amount of candy while showing your costumes.  Unfortunately, a knock on the wrong door leads to your twin being kidnapped, and held captive by goblins... and it's up to you to save them...

The premise is simple, effective, and lends itself to the game mechanics in play as well.  You knock on doors to get candy- sometimes engaging in combat with the goblins, gather blueprints for costumes that give you special abilities- and the materials to make them, and figure out how to get past obstacles (such as bullies, a teacher demanding pie ingredients, etc), and using your candy to buy "upgrades".  Overall, I quite enjoyed the premise.

The problem is that the game, sadly, become fairly repetitive.  The battle sequences with the goblins are pretty simple to win, and lose their thrill after about the fifth fight, as does the trick or treating mechanic by the time you reach the first goal of 20 houses.  After I got the third costume made, I found myself not really maintaining interest in getting others.

The characters didn't really get a lot of development during the story, though I did enjoy the witty comments they made over the course of the story.

The graphics are pretty standard for early X-Box 360 games- fairly blocky, and simplistic.

While this game is interesting at the start, it unfortunately wears a bit thin fairly quickly.  I ultimately found it to be a game that's good for playing for a while, then stopping for a few months, before doing a bit more.  As a person that generally likes to play from start to finish, without a long break in between progress, that is it's biggest flaw.  "Costume Quest" just wasn't engaging and compelling enough to make me want to play straight through.  To be honest, if it hadn't been a Halloween themed game, I'm not entirely sure I would've given it a try.  I have to give it an "Ugly".