Veteran of the Star Wars: "Episode Nine: The Rise of Skywalker" (2019) 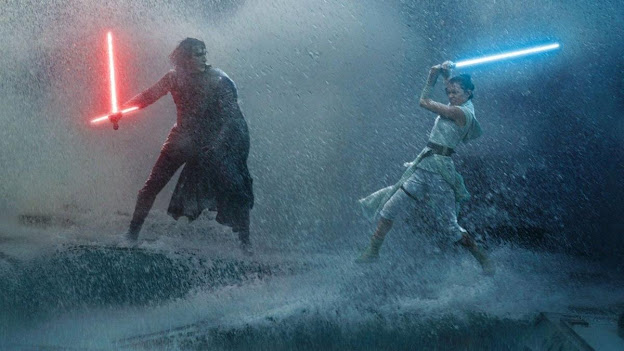 Today marks the end of the war... the Star Wars...

Nah, not really.  It just marks the end of this particular series of reviews...

Palpatine has returned to threaten the galaxy.  Luke Skywalker is dead. Supreme Leader Kylo searches out this new threat to his power while Rey takes her final steps to fulfilling her Jedi destiny...

The story for "The Rise of Skywalker" is actually pretty brilliant.  I loved that they brought back the original fantasy tone to the franchise.  While it's a little disappointing that there was not plot line for Finn or Poe to really follow, it does make a lot of sense that for the penultimate instalment of the Skywalker Saga, they would focus more on the two main ones for Kylo and Rey. These two stories run parallel to each other- and echo each other nicely.  This story telling technique really helps to enhance the theme of balance and the fact that the Sith and Jedi are similar in many ways.

While I was really quite disappointed in the lack of character development for Finn and Poe, I was satisfied with how Kylo and Rey were developed.  Along with the story, their growth and development as characters echoed each other in a wonderful fashion.  I was also quite pleased to see that Leia got some more development in this instalment as well -- and that her backstory played an important part in the overall unfolding of events.

Just like all the other instalments, "The Rise of Skywalker" is amazing, especially the battle between Kylo and Rey on the ruins of the second Death Star.  It's not very poetic or "smoothly" coordinated like those from the prequels, but it fits the personalities of the two characters.  It was rough, raw, and wild like the stormy seas upon which it took place.  Other than maybe the final fight in "Revenge of the Sith", I'd have to say the one from this movie is my favourite.

While I'm not a die hard fan of "Star Wars", I was a bit sad to see the Skywalker Saga end.  Having said that, I believe that "Rise of Skywalker" was a great way to finish it.  I'm giving it a "Good".

Join us here next Wednesday, when I bring you... "A Fistful of Clint"!