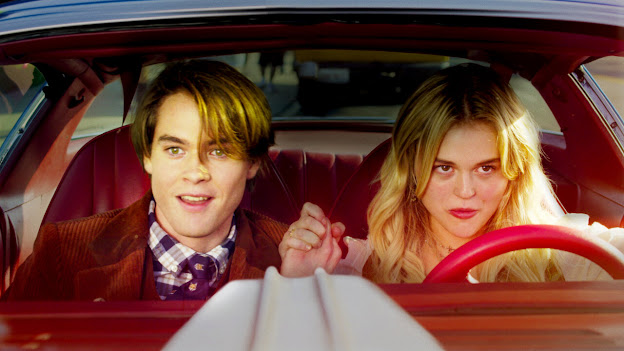 2017's The Babysitter was a simple -- and simple minded -- Netflix horror/comedy that charmed the hell out of me with its witty humour, gruesome kills, and outrageous sense of cinematic style. It also did very well for the streaming service, so a sequel was inevitable.

The Babysitter: Killer Queen dropped late last week, and sadly Shawn and I didn't catch it in time for the wrap up of From The Basement Season 1 on the mighty Radio NL 610 AM Kamloops. But I still managed to catch it during the weekend, and wanted to share some thoughts before vacation began in earnest.

The Cliff's Notes version of my review: I enjoyed the hell out of it! Not quite as good as the first, but still a horrific and funny hoot with strong ties to the first movie. Stronger than I expected actually. Well worth my time.

A few more detailed thoughts: I was surprised at how well connected The Babysitter: Killer Queen was to the first film. Pretty much everyone is back for this second instalment, including The Babysitter herself, Samara Weaving. She's not in it much, but her character is still an integral part of the story. There's also a host of new characters, including a new love interest in Jenna Ortega, and she's awesome!

Like most sequels, this one is about amping up everything that worked so well in the first. As a result, it feels like overkill at times. Like I said, this one isn't as good -- or as fresh -- as the first. And some of the pop culture references seem dated for today's audiences. But I got them, so that didn't pay me no never mind.