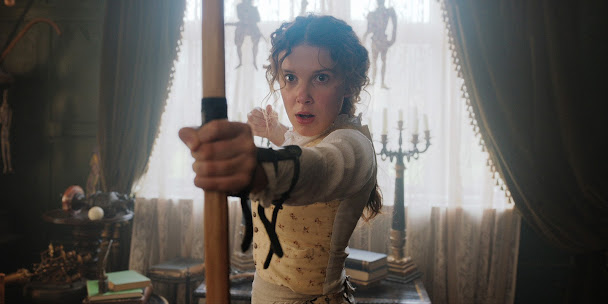 Don't be surprised if you're a Sherlock Holmes fan, like myself, and had no idea the famous fictional character had a kid sister named Enola. He didn't, at least according to his creator, Sir Arthur Conan Doyle.

But a series of young-adult novels written by Nancy Springer played on the idea that Sherlock and his a-hole brother Mycroft did indeed have a younger sister, one as brilliant and capable as both of them. And she, of course, had many great mysteries to solve.

Which brings us to the latest Netflix Original Movie, Enola Holmes. This is a spirited adaptation of Springer's books; one that is full of humour, brains, and features a brilliant hero in the form of Stranger Things's Millie Bobby Brown.

Now, Enola Holmes wasn't made for me. I'm in my 40s, live on a diet of horror and action films, train in martial arts, and love my whiskey and beer. It's aimed at teenage girls -- or at the very least teens -- and is a fast-paced family film full of perfect performances and mild action suitable for such an audience. But I could still get behind the movie for what it is, and appreciated the watch.

Millie Bobby Brown is awesome, and proves she's much more than Eleven on Stranger Things. This character is such a good role model for women. She's a strong, capable, and independent character that any teenage girl can, and should, look up to.

Cavill is a surprisingly good Sherlock, and plays him much more grounded than Robert Downey Jr. and Benedict Cumberbatch (although I prefer that representation of the character myself). And Helena Bonham-Carter is exactly who you'd hope she would be as the mother.

Enola Holmes is good stuff all around. I'm giving it a Bad only because it's not something I'd watch again, because it wasn't made for me. But I'd highly recommend it to the target audience.