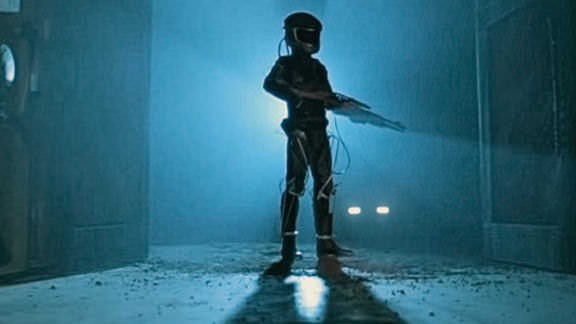 The Wraith was a movie I didn't appreciate much when I first watched it back in the 80s. I'm not sure why. Maybe I wanted more action? More Sherilyn Fenn chest nudity? Although we do get some of that...

Seeing it again all these years later, I enjoyed The Wraith for what it is: a pre-The Crow supernatural revenge tale with cool cars, hot women, and some convincing explosions are stunts. And a pre-whacked out Randy Quaid.

Actually, that pretty much sums up the movie right there. The plot involves a mysterious stranger -- and an even more mysterious driver -- who arrive in a desert community and start picking off the town bad boys one by one, all while romancing Sherilyn Fenn's character, whose boyfriend was murdered.

Is Charlie Sheen's stranger the boyfriend back from the dead to get revenge? What do you think!

The Wraith is a fun diversion, and a capable B-movie. Plus there's that great 80s metal soundtrack for us vintage metal heads. I think I was just too young to appreciate The Wraith when I first saw it. But I'm not now, and it's a Good.

What? You want me to say more? Just go watch the damn movie already!