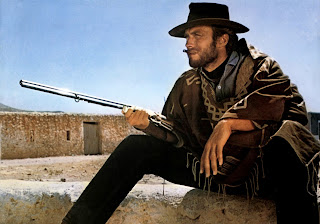 Saddle up, cow folk!  It's time to follow the tumbleweed to a time of outlaws and bounty hunters as we once again join up with The Man With No Name...

El Indio has been broken out of jail.  Two bounty hunters race against time and each other to hunt him.

Who'll catch him the outlaw first?  The nameless drifter, or the former Officer who has a personal stake in the confrontation with El Indio?

This sequel to "A Fistful of Dollars" keeps up the tradition started with the first one.  Stark landscapes, morally ambiguous characters, and setting a new standard by which Westerns would be measured against in North America.

The story isn't really all that complex- but is certainly sufficient to carry the weight and power of the characters.  In fact, this movie is absolutely more about the characters than the plot.  You're bound to lose track of the story details as you become fascinated by the three main characters.  They're all unique, interesting, and amazingly well crafted.  What I found to be an amazing, but subtly done element was the fact that Clint Eastwood's character is the focus of the viewer's attention... while thematically being a supporting character of Lee Van Cleef's and Gian Maria Volonte's characters.

Of course, the characters were brought to vivid, wonderful life by three great actor's.  Their performances were just amazing and spellbinding.  I especially have to praise Volonte in the role of El Indio.  He brought such a marvelous sinister feel and aura to the character.  Of the three, I'd have to say that he was probably my favorite performer in "For a Few Dollars More".  Just amazing to watch- especially in his close-ups.

The final gun fight was tense and well shot (pun intended).  The editing ramped up the suspense, until you're ready to scream, "Draw already!"... then BAM! There's a sudden burst of gunfire and violence... and them an eerie calm as you come down from the excitement.

There's no doubt that "For a Few Dollars More" rides into the sunset with a "Good".