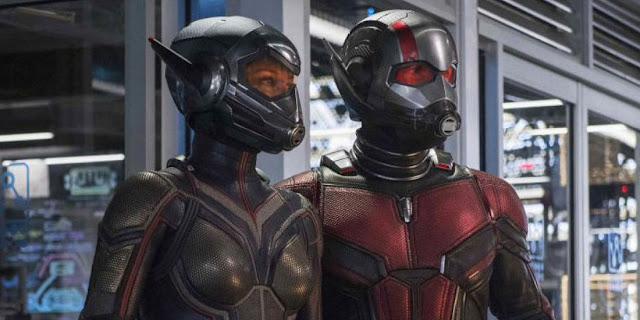 As Wednesday rolls around, the portal to the Marvel Cinematic Universe opens up again... beckoning me to enter a world of superheroes fantastic adventures...

While under house arrest, Lang receives visions purporting to be the supposedly dead wife of Hank Pym.  Convinced she's alive in the Quantum Realm, Lang, Hank and Hope set out to rescue her... but to do so, they must race against time and a mysterious "ghost" haunting their every step...

"Ant-Man and the Wasp" is a fun little story that follows in the same mold as the first "Ant-Man" movie.  It doesn't deal with a cosmic threat.  Rather this story is more ground level and character driven.  It moves along at a nice clip, and keeps you interested in what's happening.

All of our favorite characters are back from the first movie- including Luis, and they use this movie as an opportunity to add depth and breadth to the characters.  The antagonists are interesting and even engaging.  All of the character interactions are fun and enjoyable.

This movie really helps to add some texture to the Marvel Cinematic Universe by NOT being about a world level crisis.  The scale of the story is on a more personal level- for both the protagonists, and the antagonists, giving us a nice break from larger scale problem of Hydra, Ultron, Thanos, etc.

I quite enjoyed watching "Ant-Man and the Wasp" as much as I did the first "Ant-Man", and will be looking forward to the next movie in the franchise.  I'm going to give it a "Good".