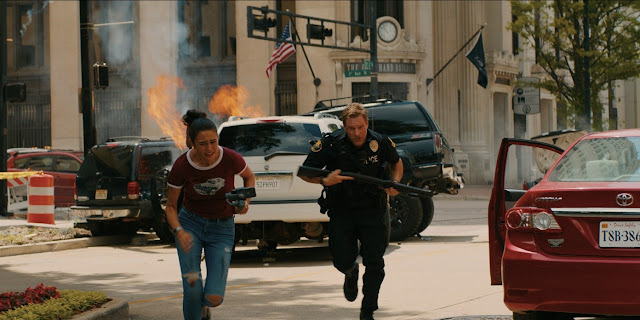 I was jonesing to see Steven C. Miller's latest action flick for a while. It's been out in the states since November, but just turned up in Our Home and Native Land. Suffice to say, as soon as I got my hands on a copy, I poured myself a whisky and watched it.

And I was not disappointed. Sure, this is a lower budget effort, but Miller is very good at getting a lot of bang for his buck, and he does so again here.

Much of Line of Duty's running time plays out in real time, with disgraced cop Aaron Eckhart in a race to rescue a police chief's daughter from kidnappers. This makes for a propulsive thriller that's essentially one long chase via foot, vehicle and, toward the end, helicopter.

Miller and Eckhart commit themselves to the project, instilling it with energy and fun. The director knows how to shoot an action scene, and excels at keeping things moving. And Eckhart throws himself into the role as an aging action guy with a lot of baggage. They make this film work, and work well.

I also dug Courtney Eaton's spunky online journalist. She's a great sidekick, and Miller and screenwriter Jeremy Drysdale are able to inject some commentary on media and click-bate obsession. Not too much, as this is an action flick, but a bit.

In the mood for a fun and frenetic action movie? Then give Line of Duty a watch this weekend. It's a Good.