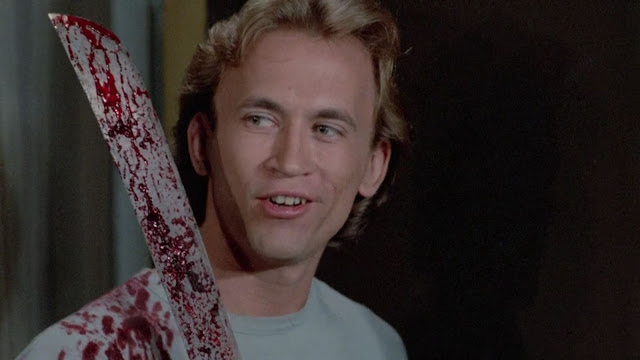 Blood Rage, AKA Slasher, AKA Nightmare at Shadow Woods is a rare thing for the genre in that it takes place during Thanksgiving. Yup, this is a Thanksgiving slasher movie. Not Halloween. Not Christmas. Thanksgiving. We get very few of these, so rejoice... ish.

The plot focuses on twin brothers, one of whom commits a brutal murder as a boy and frames the other. What a dick! Years later, the innocent brother escapes from a mental institution on -- all together now -- THANKSGIVING and heads for home, prompting the dick of a twin to begin killing again. Why? Why not! There'd be no movie otherwise.

All the cliches are here. We get the jock, the slut and the final girl. The acting is either over the top or lazy. And, like many Halloween and Friday the 13th ripoffs, it's strictly amateur night in terms of directing and cinematography.

Where Blood Rage shines is in the effects department. This is the only part of the movie where those involved seemed 100-per-cent committed. The kills are well staged, gory and realistic. And a lot of people are killed in this one. Well done, team!

I've seen far worse slasher movies in my day, but this certainly isn't one of the best. Still, as a late-night view with some beer, it's a passable enough time waster. I'm giving it a Bad, and leaving it at that.