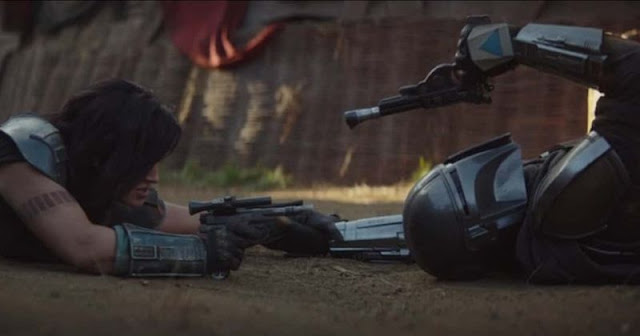 The Mandalorian continues to be the best thing Star Wars in 36 years with this fast-paced, and highly entertaining, fourth episode. Not only do we get equal measures of action, emotion and humour -- which are staples of the very best Star Wars entries -- but even a hint of romance too.

This episode finds The Mandalorian and "Baby Yoda" recruited by farmers who are threatened by a band of marauders, so creator Jon Favreau employs some Western tropes, making this episode feel a bit like Pale Rider or The Magnificent Seven. I'm OK with that, as the Western references never seem to get old.

The Mandalorian partners up with Gina Carano's Cara Dune, a former shock trooper turned wanderer, for this fight, and she proves herself one of the more formidable -- and likeable -- characters in the Star Wars universe. Note I didn't say women. She's just a good character, and I hope we get to see more of her.

Avoiding spoilers for those who haven't seen it yet, we also get more insight into the Mandalorian religion, and why they keep their helmets on. Yes, Mando does take his off while in private this episode, but we still don't see his face. There's a whole lot of shame in removing one's helmet in the presence of others, I'll say that.

As for the romance; it's not with Dune, and it's only implied. I'm impressed by lead Pedro Pascal. He conveys so much with voice and movement, that we get a clear feeling for his emotions without seeing his face. It's a great -- and I'm sure underrated -- performance.

This is another Good for The Mandalorian, and I'm beginning to suspect the level of quality will remain throughout the rest of the episodes.