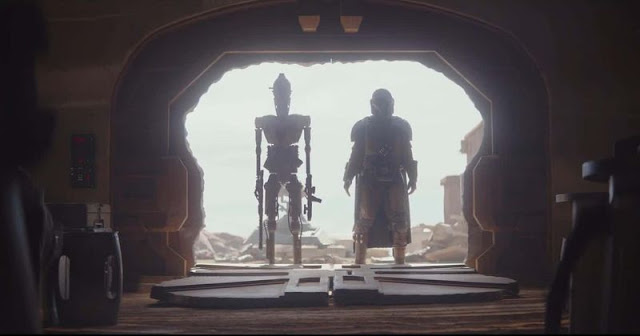 The only word is wow!

That's the best way to describe The Mandalorian, Disney +'s flagship show, and the first Star Wars TV series ever made. It's everything you'd want a Star Wars show to be.

This feels like a feature film is every aspect. The scale and scope, the visual effects, the sense of humour; The Mandalorian embodies Star Wars. The vibe is more in line with Rogue One and the recent trilogy -- with a little Sergio Leone spaghetti Western thrown in -- but there's nods to the original movies as well, including a land-speeder shot ripped from A New Hope without making the audience feel ripped off.

Fans slighted by The Last Jedi need not gripe here. I have a feeling The Mandalorian will set their minds at ease. Much respect is paid to the canon, with many geekster eggs for long-time fans. Again, they're here to enhance the experience, not detract from it.

What I dig, and it's what I've dug about the best of the franchise, is concepts are introduced, but not overly explained. It's just part of the universe. Everything looks dirty and lived in. My dad always called Star Wars the best Western he'd ever seen, and there's definitely some of that going on here as well.

There's an aura of mystery too. I have no idea where The Mandalorian will go, other than it's about a bounty hunter who, by episode's end, is clearly in the middle of a s--t storm of epic proportions. We're only getting an episode a week, just like the old days, so my anticipation is quickly building for episode two.

The Mandalorian is a Good in every aspect. If you're a Star Wars fan, or even on the fence after The Last Jedi, I suggest getting a subscription and giving this a watch.