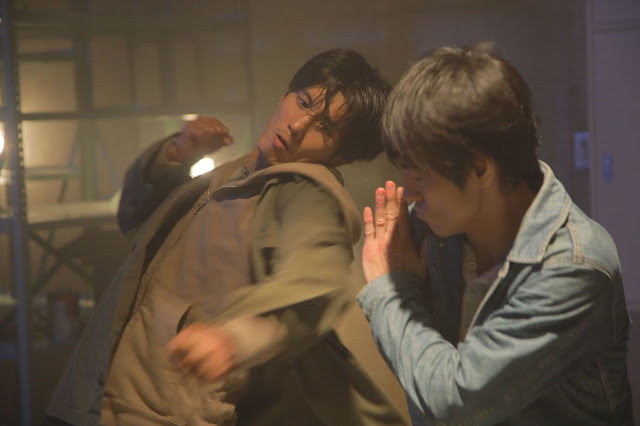 A lot of what we do in The Basement is horror related. It's been our bread and butter for almost a decade, and we love it. But Shawn and I also dig our action movies, and few can argue Asian cinema has the action racket down.

You wanna argue? Shut your mouth!

Coming at audiences Nov. 23 is Hyrda, which marks the directorial debut of Kensuke Sonomura, a long-time stunt professional and the byproduct of action legend Yasuaki Kurata's Action Club, and Yuji Shimomura's U'den Flame Works. That, my friends, is a hell of a pedigree.

One would expect Hyrda to be a balls-to-the-wall martial arts/action extravaganza, but it's actually a quiet film with moments of brilliant action thrown in. And, at just 75 minutes, it feels more like a TV pilot than a full-on feature film.

This is not a complaint, as I don't mind leaving a movie wanting more. But all the groundwork is laid for something bigger, and better, and I'm hoping we get to see it.

What we are offered is the story of a laconic cook who, we quickly learn, has quite the mysterious -- and violent -- past. He becomes involved with a restaurant and its owner, a woman who's father disappeared three years prior. How a lecherous police officer and clashing underground organizations fit into this is part of the fun.

I admit, that sounds like a bit much. But Sonomura unfolds the story deliberately, teasing us with great things to come. And they do eventually come, as the last half hour is a solid bit of action filmmaking that's worth the wait. The fight scenes are pure visceral brilliance, with some of the smoothest, and most dynamic, fight choreography I've seen in some time.

The cast, which includes Masonori Mimoto and the beautiful Miu, is uniformly excellent. 'Nuff said.

Hydra opens in Japan on Saturday, and I encourage our fanbase there to check it out. Hopefully North American audiences get to see it soon too, as it's a Good!