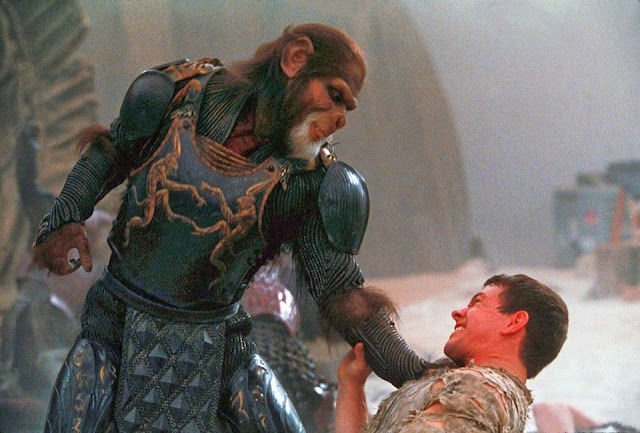 Some franchises are interesting enough to warrant a reboot.

But sometimes, the reboot isn't as interesting as the original.

The story is an interesting variation on the story from the original movie series- but the execution of it was less than stellar.  It lacked the themes and message of the original- which is what made the original a sci-fi classic.  The film comes off as unintentionally silly, and unforgettable.

The characters weren't horrible- but weren't memorable.  The only decent character that I enjoyed was General Thade.  While he's a little over the top, I still really thought he was a stand out character compared to the others.  The rest were just kinda... there.

The acting wasn't too bad- though once again, the stand out performance was by Tim Roth as General Thade... possibly because of his intensity and over the topness.  The rest were enjoyable enough to sit through the movie- but certainly not worthy of geekig out about.

Visually, Tim Burton's "Planet of the Apes" is amazing.  I loved the look of it, especially since it was pretty far from the standard style that Burton employs.  In fact, I have to give mad points to him for doing a movie that is so unlike his usual stuff.  If anything, this film deserves a viewing just for how much of a departure it was for him.  It's just beautiful- deeply textured, richly coloured, and stunning.

Unfortunately, it's not a movie that makes me want to rewatch it more than once.  I'm going to have to put it in 'The Bad."