Review: My Soul to Keep 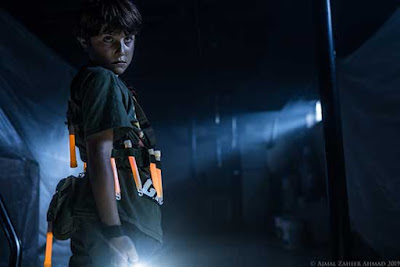 Hidden gems. Damn, we love them here in The Basement. That movie that comes out of nowhere -- or with little fanfare -- and hits you right in your entertainment centre. They are few and far between, but when Shawn and I find them, we're pleased!

My Soul to Keep is definitely one such movie.

Critics have so far called the movie Home Alone meets Stranger Things. I'd say close, but not quite. There's qualities of both in writer/director Ajmal Zaheer Ahmad's story of a young boy who believes there's a monster in his basement that's intent on stealing his soul. But My Soul to Keep is so much more than that.

My Soul to Keep is essentially a story about fear, and how children process it. I have a seven-year-old boy and he does not like being in the basement alone -- at all! And throughout his short life, he's believed he's seen things down there, and it's scared him. Yet he keeps manning up, coming downstairs and facing that fear.

THIS movie captures that struggle -- which we all have growing up -- beautifully. And it gets plenty scary at times. In fact, once Shawn and I finished screening this one, I had to go upstairs and check on my sleeping son to make sure he was OK. And I'm a middle-aged man!

There are scares aplenty in My Soul to Keep, but none of them rely on gore or too many special effects. In fact, most of the effects appear to be done in camera. This is good ole fashioned moviemaking, and the film could be considered family viewing at Halloween if you've got slightly older children.

The acting is decent throughout and the film is very well made. It looks great! My only complaints are I wish the camera had stopped moving just a little bit (I prefer more John Carpenter to Michael Bay) and some of the music felt out of tune (so to speak) with what I was watching. But these are minor gripes, and didn't hinder my enjoyment.

My Soul to Keep rates a Good, and Shawn and I encourage peeps to see it when it hits Oct. 4.