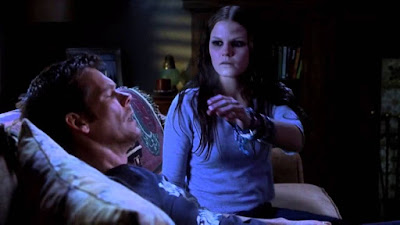 The summer of 1999 was a hell of a good one for horror. We got The Sixth Sense, The Blair Witch Project, Stigmata, Deep Blue Sea, The Haunting (well, maybe not The Haunting) and Lake Placid.

Oh, and Stir of Echoes, of course.

The film is a perfect exercise in slow-burn tension that doesn't rely on special effects, but focuses on a compelling mystery, creepy visuals, and an old-fashioned ghost story. And it was based on a tale by the late, great Richard Matheson, which is always cause for celebration.

Kevin Bacon and Kathryn Erbe hold the film together as a blue collar couple. Bacon is hypnotized by Erbe's sister, played by the always reliable Illeana Douglas, and becomes "more open minded," which puts him in touch with the spirit of a dead girl who very much wants her body found.

It's a classic kind of story, and is very well told. It's genuinely creepy, but not in an over-the-top way. This makes it a film worth remembering, and a Good in my book.

Oh, and forget the sequel. It's basically the same movie retold with Rob Lowe instead of Kevin Bacon. 'Nuff said.