Retro Review: The Chronicles of Riddick (2004) 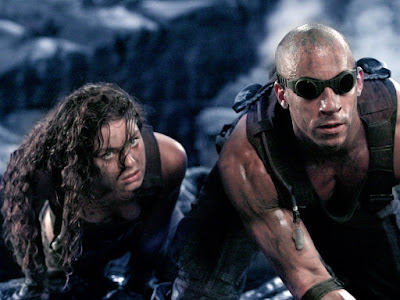 Why? Because I recently revisited the much maligned Chronicles of Riddick, and I have a few things to say.

The movie underperformed at the box office, and was criticized for taking the small-scale world Vin Diesel and director David Twohy created in Pitch Black, and opening it way the fuck up, creating a whole universe and mythology.

I'm still not sure how that's a bad thing as, rewatching the film, that's something I appreciated about it more now then when first watched it. The Riddick universe is a big, fun, crazy thing complete with prison planets, undead fascist aliens, and many other strange beings. It reminds me of the role-playing games I played as a kid, only brought to life in a $100-million budgeted flick.

Riddick is also a great character. I think of him as a Mad Max type; he's not the focal point of the film, just the through note. And he's a total bad ass, which is seriously lacking in movies these days. I sincerely hope they make a fourth film.

The one flaw with Chronicles of Riddick? The special effects. This is a CGI-heavy movie, and the CGI is seriously dated. A Marvel/Star Wars production this is not.

Still, if you haven't given Chronicles of Riddick a watch lately, do so. It's better than you remember it being. A Good!