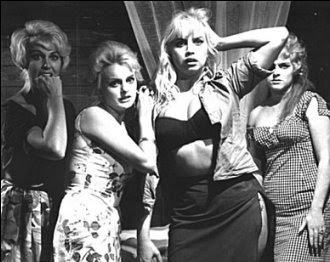 A New York agent gathers up a group of dancers for a show in Singapore.  En route, their plane crashes on a small island where a professor was mining uranium.  Soon, the agent is bitten by a radioactive spider, and begins to stalk his young, sexy prey...

This is very much the sort of cheese you'd find at 2:30 am on a crappy local cable station while you can't sleep.  This German exploitation film is a horror from start to end.

First off, the story could potentially avail itself to a decent story.

But it doesn't.  There's no real story... or real logic to the flow of it, to be honest.  It focuses on the "sexy" rather than the "scary"... but doesn't quite pull off either.

Don't ask about the characters, as there is very little to them.  Once again, there is more of a focus on the "sexy" than the "character" of the character... unless you consider constantly forgetting about the dead & missing people, AND the man-spider running around a character trait.  The female characters are more concerned about getting a bit of "happy time" with the male characters than not dying.  But, in its defense, this IS an exploitation film after all...  Yay, patriarchy!  Yay, toxic masculinity!

I really don't want to think about the visuals.  Palm trees in New York, a plane that changes appearance three times, with it's final form being a burning WWII bomber crashing into the sea.  A huge spiderweb made from ropes.  A comical spider that's more inclined to strangle its prey than bite it.  A man-spider with a face that's more reminiscent of a cheaply made Phantom of the Opera mask.
Take the image below, construct it out of oatmeal, and you have an idea of the spider face. 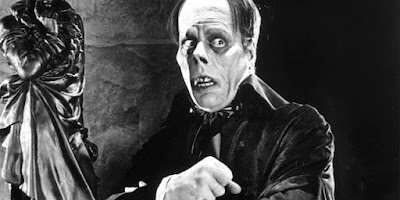 This movie deserves all the mockery it gets in my opinion.  It's just a horror of a movie.  It's very much an Ugly.