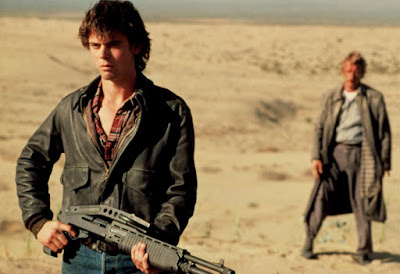 A lot has been written about The Hitcher, to the point that writing more seems rather pointless. That being said, I'm gonna write something about this classic anyway.

The Hitcher is a notorious movie from my childhood for all the right reasons. It's one of those films that was whispered about in the high-school hallways, as some of my crew had parents willing to take them to it. Mine didn't. Dicks!

Watching it again 33 years after it came out, The Hitcher hasn't lost much of its punch. It's not as bloody as I remember, but few movies are. But it is intense, and feels very much like a waking nightmare.

To me, The Hitcher is about a serial killer who wants someone to stop him, and the latest person he choses to do so might not be the right one for the job. Only when pushed well beyond the breaking point is C. Thomas Howell's character able to do what should have been done in the film's first act. All the deaths in this movie rest on his shoulders, not The Hitcher's.

This makes for fascinating cinema. Add in some ethereal cinematography, taught direction and solid performances, and you've got a film that has earned its status as a classic of this, or any genre. A Good.