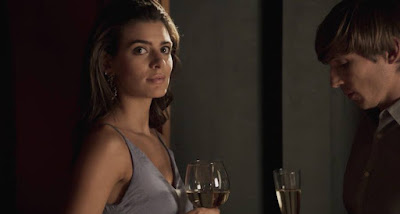 If you're hankering for a brilliant bit of a visual storytelling, then the upcoming thriller Dolorosa Gioia, AKA Sweet Pain, is the flick for you. Wanna know why? Check out my review of Bruise Productions' latest flick right here.

The film is rocketing toward a Spanish release, and has a new one sheet as a result. We've scored a look at it, and now so have you. Sweet Pain is about a composer who falls into emotional turmoil when he moves into a new house, a place that brings painful memories to the surface that threaten his very sanity. That's the Cliff Notes version anyway. It's good stuff, and demands to be seen!

The film is written, directed and produced by Gonzalo Lopez. John Fallon co-produced under his Bruise Productions banner. Stay up to date on its journey to the screen via the official Facebook page.