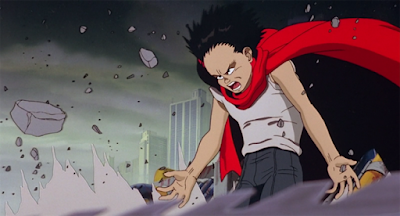 The Animated Addict is back with a review of possibly one of the MOST influential animated movies of ALL time- 1988's "Akira".

Years after the mysterious destruction of most of Tokyo, a new city- Neo-Tokyo has grown around the ruins of the old city.  Rebellion is becoming an every day event, and bike gangs wage turf wars throughout the streets.  During one such skirmish, Tetsuo- a member of the Capsules is injured.  Before his friend Kaneda can get him to a hospital, the military shows up and spirits the injured Tetsuo away.  As he seeks to find out what happened to his friend, Kaneda gets involved with a rebel plot... and learns that his closest friend may in fact be his biggest threat...

"Akira" is the film that opened the Western World completely to anime and Japanese pop culture.  The story has influenced movies from "Blade Runner" and "The Matrix" to even the Star Wars prequels, and "Inception"  It created an entryway into North American culture for world phenomenons like "Dragon B", Naruto", "Pokemon".

The story is based on a manga- though does diverge a fair bit in the latter part.  In fact, this anime encouraged me to seek out and read the original manga.  It's a tightly written, fast paced, and engaging story.  It smoothly melds sci-fi, action, and suspense into a truly entertaining ride.

And the animation... oh my fucking god!  The animation.  The Japanese animation industry has always been known for stunning visuals- and "Akira" does not disappoint.  Not at all.  There are fine details, phenomenal shading and lighting effects.  The backgrounds are just as amazing.  Everything from the small small rocks lifting up from the ground as Tetsuo using his abilities to the vibrant, electric city designs combine to create a visual treat for the eyes.

The characters are well crafted and developed during the course of the stories- and you come to like both the protagonists Kaneda, The Colonel, and even the antagonist, Tetsuo.  They are NOT your standard North American cartoon characters.  They are fully realized personalities that engage you in a mature fashion.

The English voice actors did a great job of dubbing the lines in a way that gets across the proper tone and emotion for the scenes.

I also really enjoyed the scoring for this movie as well.  It was unique and stood out from the normal stuff you'd find in an animated film.

I'm going to have to say that "Akira" is still a remarkable piece of animated cinema that stands the test of time.  I would certainly recommend watching it.  Without a doubt, it goes in "The Good".