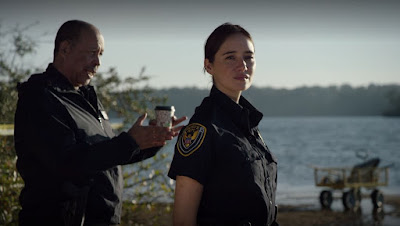 The Drunken Review is a Basement feature wherein movies are reviewed under the influence of alcohol. Why? Because some movies are better reviewed with booze, almost like the filmmakers designed them that way.

Last night, I tackled the 2015 Dolph Lundgren flick Shark Lake. Because if any movie was designed for The Drunken Review, it's one where Dolph Lundgren punches a shark in the nose . . . in a lake. Does Miller High Life make this a fun and enjoyable ride? Stick with me!

By all accounts, this is a pretty bad film. There clearly wasn't the time, budget or talent to pull it off. This has the look and feel of a 90s TV movie with added gore, and added poorly I might add. The CGI is everywhere, and awful.

Director Jerry Dugan doesn't know the first thing about staging a scare, or an action scene for that matter. Things just happen like we're supposed to be scared or surprised or, dare I say, thrilled. Not a single emotion was raised though, and that's not because the feelings were muted by The Champagne of Beers.

I'm pretty sure Dolph was on set for about two days. His scenes are few and far between, and he's given little to do until the end. He remains a likeable presence though.

The one shining light here is Sara Malakul Lane as the hero cop. She is, to quote Fat Bastard, dead sexy, and has some talent too. I hope her career takes her to better films.

Movies don't get much more Ugly than this!

PS: I legit tried to find an interesting image to "sell" Shark Lake for this article, but that proved futile.