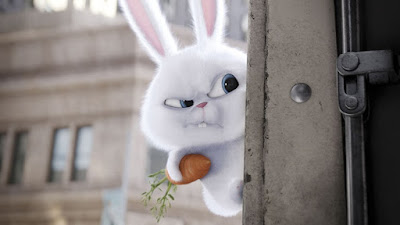 Have you ever wondered what your pets get up to while your gone?  I have, so I figured "The Secret Life of Pets" might be entertaining...

Max the terrier has the perfect life: a warm bed, free food, and a loving human.  Then his human gets a second dog... a large shaggy one named Duke.  During their struggle to determine dominance, they find themselves lost in the city.  Now, they must team up to find their way home...

After the wild success of their "Despicable Me" franchise, Illumination was poised to become a big player in the world of animation.

Unfortunately, their 2016 movie, "The Secret Life of Pets" was a bit of a let down.

And what was up with the acid trip of a "weiner factory scene"?

I also found it hard to really like Max or Duke as they try to get home.  They were just... bland and generic characters to me.  I found myself impatiently waiting for the scenes featuring the supporting character of Gidget, and the ones featuring the maniacal bunny Snowball.  They were far more intriguing and entertaining than Max and Duke.  The supporting characters and antagonist should never be more interesting than the main characters.

And seriously- what was up with that dancing "weiner factory scene"?

I will give credit to the outstanding voice acting, though.  They really did bring personality to the characters, and matched up to them quite well... as uninteresting as they were.  Special credit to Albert Brooks as Tiberius, Jenny Slate as Gidget, Kevin Hart as Snowball, and Lake Bell as Chloe.  They had the most interesting characters, and did a great job bringing them to life.

But I still want to know what the deal was with the "weiner factory scene"?

Was the story lagging, and the studio felt they needed to pull a "Disney", and fill in time with a musical number?  What was the point?  Were they hoping to create another freak hit character type a la Minions?  I just don't understand.

To be honest, I don't WANT to understand.  The less I understand about it, probably the better.

Give "The Secret Life of Pets" a pass, and hope that Illumination picks up their story-telling game in the future.  I'm giving it a spot in "The Ugly", and that's no secret.