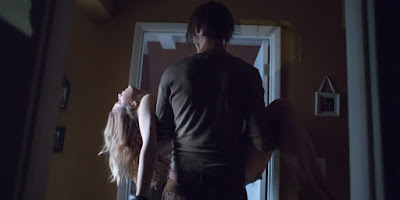 It's rare when you come across an obscure horror movie that starts with the Warner Bros. and New Line Cinemas logos. These are the studios who brought us The Conjuring films and their spin offs, plus other horror hits like Lights Out. Most of their flicks go theatrical, and not straight to VOD.

Within? Never heard of it . . . until it showed up on my Netflix account.

Pushing play, I didn't know what to expect. I certainly didn't think I'd get into it as quickly as I did, or enjoy it at all. I figured it was one of those flicks you fall asleep to after a night at the pub.

But Within is better than that. It's a haunted house movie with a twist, and offers some genuine scares and suspense. Sure, the characters make dumb decisions that serve the script, but make little sense otherwise. And the filmmakers try too hard to throw red herrings the viewer's way. That'll make sense if you watch it.

But we're not a bunch of pretentious dicks in The Basement. Like I said, Within has some real chills and, as it nears the last act, a mean streak. And things end the way Shawn and I like them too, from time to time. Take that however you wish.

The cast is good, especially Erin Moriarty, who plays the female lead. She throws herself into the teenage daughter role, and owns it. And yes, she's very easy on the eyes. Don't fret, though, guys. I did my research -- she's in her 20s.

Will I watch Within again? Maybe, but no guarantee. It's definitely worth watching once, which means it's a Bad.