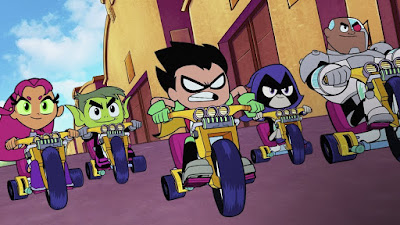 I'm not a fan of animated films. Gotta get that off my chest right away. Shawn sure is, and Mike S is our Animated Addict. That's their thing, not mine. Shawn even tried to get me to watch the animated DC films, saying they're the cat's ass (my words, not his). I could care less.

Fortunately, I've seen bits and pieces of the series, and find it a fun sendup of the super-hero genre. Equally as fortunate, Teens Titans Go! To the Movies is more of the same, and parodies Hollywood's infatuation with comic-book films.

And it's legit funny, as my boy would say.

We're not pretentious here in The Basement, so believe me when I say to you this has one of the best fart gags ever put on film. I laughed just as hard as my son during this sequence. And there's plenty of jokes aimed at comic books, super heroes and those who know the genre, both in print and cinematic form.

Yes, Stan Lee makes a cameo appearance. And yes, that is Nicolas Cage as the voice of Superman . . . or the best Nicolas Cage impersonator I've ever heard.

This is a silly movie, but it's smart in its own way. There's plenty for kids to enjoy, as well as adults. And it's not quite 90 minutes long, so just the right length for young attention spans . . . and their parents.

But no, Shawn, I'm not watching your animated DC movies.