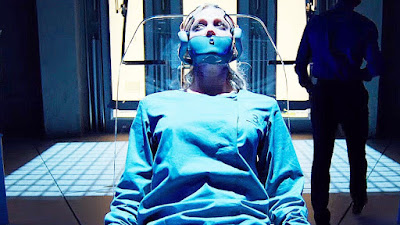 Netflix has created a nice niche for itself as a purveyor of B-grade genre flicks, and we in The Basement applaud the move, as that's our bread and butter here.

Some are better than others. Spectral was decent, The Open House not so much. A couple of weeks back they unleashed Tau, featuring the voice of Gary Oldman and It Follows and The Guest starlet Maika Monroe in a one-location sci-fi thriller about a kidnapped woman and a deadly AI.

High concept? Not really. But it does have the trappings of a decent low-ish budget thriller. Does it meet those expectations? Stick with me!

For the most part, Tau is exactly what I'd hoped it would be. It starts slow, but pays off in many ways, with some cool gore and more character development than one gets from many movies like this.

It helps that Oldman and Monroe, who are essentially the stars here, do good work. Well . . . Oldman's voice and Monroe that is. He's always solid, even if he's just talking, and she makes for a fetching damsels in the distress.

Ed Skrein, who plays the creepy abductor/Steve Jobs bad guy is also good. He doesn't chew the scenery or go off the rails. In fact, it's how controlled he is that adds the necessary menace.

I like the "relationship" that builds between Monroe and the AI, even if we've seen it before. And I didn't get really bored, even if Tau is essentially a two-person and one location show. It's not something to screen again and again, but as a one-time watch, I was sold. A Bad for me.