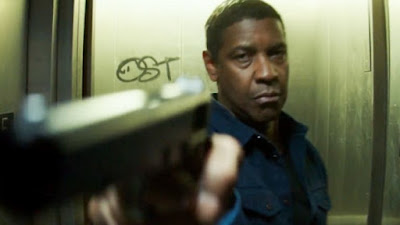 2014's The Equalizer was a loose, but decent, adaptation of one of my favourite childhood TV shows. It was a brutally violent film with a compelling lead character and some corny 80's TV show elements.

The Equalizer was a pretty big hit, so a sequel was inevitable. Four years later we've got The Equalizer 2, and I'm happy to say it was worth the wait.

Once again directed with style by Antoine Fuqua, this film delves more into Robert McCall's past, allowing Denzel Washington to bring on the feels while still putting foot to ass in appropriately nasty fashion.

While the first Equalizer was, as I already pointed out, a little corny, the sequel is not. It's a smaller, more personal film, with a few concurrent storylines that come together in predictable, but entertaining, fashion.

How's the action? The final showdown plays almost like the ending of Pale Rider, only in a storm, and is quite effective. There's also a fun fight inside a moving car that is very well done. There's not as much combat in The Equalizer 2, but what we get is worth the admission price.

If you liked the first film, and/or are a fan of the series or Denzel, The Equalizer 2 is worth your time. I'm giving it a Good.