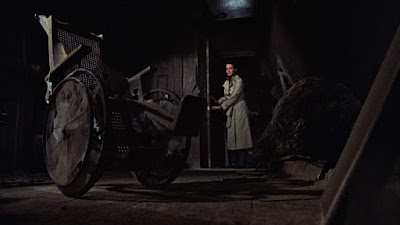 It's the Canada Day long weekend, and what better way for me to celebrate... than with a list of my top five favorite Canadian made horror movies?

So, without much further ado, here be my faves (in alphabetical order):

1.  "Black Christmas" (1974):  This isn't just one of my faves, it's Jay's as well.  A group of sorority girls are spending Christmas on campus... and unexpected "plus one".  What begins with a obscene phone calls soon turns into a game of cat and mouse as the women try to stay alive.

2.  "The Changeling" (1980):  This George C. Scott film is by far one of my longstanding favorites.  After the tragic death of his wife and child, John Russell moves into an old mansion in the hopes of dealing with his grief, and resuming his musical career.  Soon, though, strange happenings propel him on the trail of a ghostly child... and a dark, murderous secret.

3.  "Insidious" (2010):  This one had some moments that had me legitimately going, "OMG".  The Lamberts have moved into a new place, only to have their son fall from and a ladder and into a coma.  Shortly after, they experience paranormal events that cause them to ask for help.  The family is soon thrust into a world known as "The Further" as they seek to rescue their lost son.

4.  "My Bloody Valentine" (1981):  A classic horror film that bridges the 1970's and the 1980's.  To celebrate the end of a 20 year ban on Valentine's Day in their town, a group of teenagers, decide to throw a part in the old mines (where an accident had occurred that led to the ban in the first place).  Unfortunately, an uninvited guest decides to show their disapproval... and things get messy.

5.  "Scanners" (1981):  An iconic film that gave us the famous "head popping" scene.  What would happen if the Government were to start using telepaths as weapons?  What if those self-same telepaths decided to turn against their handlers?  Whatever happens, just remember, "Their thoughts can kill you..."

BONUS:  Just because, I'm including a GIF of the iconic "Scanners Head Pop":