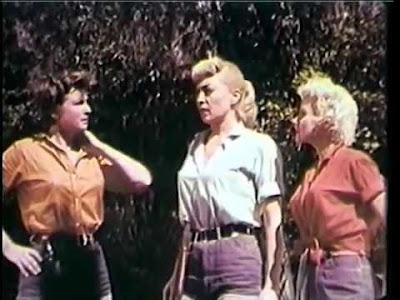 It's 3:00 am.  The air wafting through the drapes is hot- slowly sucking the moisture from you.  Your restless mind feels clogged with cotton balls.

You can't sleep, but you can't fully wake up either.

That's when the flickering images on the TV screen catch your attention and you realize that you're watching an old movie.

After infiltrating an all woman gang, Officer Hampton must help them escape from prison and join them as they trek through the nearby swamp to a hidden cache of stolen diamonds.  Will the marshes kill her before the brutal vipers she's with do?

The story is very basic.  Very basic.  Four female criminals trudging through a swamp to find diamonds.  They take a male hostage.  The hostage and one of the women are attracted to each other.  Group finds diamonds.  Betrayal occurs.  Woman reveals she's a cop.  Criminals are captured.  And that's it.

As are the characters.  They aren't all that developed, and unfortunately give the film a "blah blah blah" sort of feel.  The rather "meh" acting didn't help.  I think the actresses were cast more for their looks than their ability.  They weren't bad "eye candy"... provided you bore in mind the 1950's idea of "eye candy".

And the camera work.  Though I must admit that I was quite amused at how the actresses hair never got mussed up despite a couple of fisticuffs, and trudging through a swamp.  There was very little in the way of drama or suspense to the editing.  In fact, part way through, the film quality abruptly changed.  To be honest, the films reminded me a lot of how old educational films looked back then.

Of the Corman films, "Swamp Women" is one of the least interesting ones- and least memorable.    I honestly can't think of much to say about it.  I'm going to have to put it in "The Ugly".