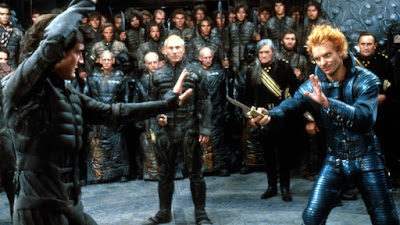 It's 2:30 am, the summer night breeze is wafting through the open balcony door as the distant, lonely sound of a train floats mournfully as it passes.

And I find myself watching David Lynch's 1984 film, "Dune"- based on Frank Herbert's novel of the same name.

The substance called "spice" makes interstellar travel possible.  Since "spice" is only found on a single desert planet in the known universe, those that control the substance controls the universe.

Soon however, a political chess move will push one family- and the universe into an unexpected direction...

This is the basic premise that created one of literature's most iconic franchises- which inevitably lead to a movie adaptation.  This particular one was directed by David Lynch, and starred Kyle MacLachlan (who would later star in Lynch's "Twin Peaks"), Patrick Stewart, Sean Young, Brad Dourif, and Sting.

I'm not going to lie.  This movie is kinda cheesy, and gives off a very 1980's vibe.  From the costumes, to the visual effects, to the acting.  Tasty cheese in some respects... but still cheesy.

The basic story is strong, but is overshadowed by the dated costumes, and slightly hammy acting of the period.

As I've said, the acting can be a bit cringe inducing at times because it almost feels as if it's a TV movie.  This is especially true with Kenneth McMillian as Baron Harkonnen (the floating fat man), and Sting.  MacLachlan's acting isn't bad, but unfortunately is a bit overblown in a few parts- such as when screaming, "The sleeper has awaken!" in the middle of a desert.

I don't know if it's the writing, or the acting, but  I found it hard to care much for any of the characters.  They all came across as a little bland and uniform.  The only character that really stood out was Baron Harkonnen... but it's hard NOT to stand out when you're a large man who floats and showers in oil before killing a man and rubbing their blood all over your pustule covered face.

But standing out for this reason isn't really all that great either.

While the visual effects are fairly obvious and dated, I did have an appreciation for what the studio was able to accomplish back then.  Unfortunately, I doubt they would fly with today's movie going audience.

So, as the sun started rising, and this movie came to a close, I'd made my decision, and sadly had to give "Dune" a spot in "The Bad".  Good for a single viewing when you can't sleep, but nothing special.