Having My Say: The Good, The Bad, The Fandom 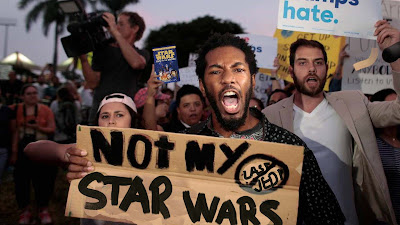 Star Wars fans are the latest group of "fandoms" that have become toxic to their chosen franchise, and geekdom in general.  Their outrage at the prequels, a Jamaican sounding alien, a black stormtrooper, the revelation about Rey's parents, the introduction of Rose, the portrayal of an older Luke Skywalker, etc.

They make me shake my head.

While, I have issues with the prequels (mostly due to it's over reliance on CGI, and the affect it had on the performance of the cast), they weren't BAD movies.  I also wasn't a fan of Jar Jar, but not to the point where I would consider vilifying the actor who portrayed him to the point where he almost committed.  Also,  I certainly wouldn't have harassed a little kid about his role as a young Anakin so much that he'd give up acting altogether.

But that's the toxic behaviour that Star Wars fans indulged in.

While I'll certainly agree that "The Force Awakens" had some strong similarities to "A New Hope", I wouldn't say that it sucked because of it, and threaten to boycott the next film if JJ Abrams was directing.  "The Last Jedi" certainly wasn't what I was expecting, but I wouldn't say it sucked because of it, and start an outcry to bring back Abrams... who had been blamed for the previous film being to much like "A New Hope".

But that's the toxic behaviour that Star Wars fans indulged in.

While I wouldn't say that Rose was my favorite character (I found her a little flat to be honest), I certainly wouldn't have harassed her off of Instagram.  While I also admit that "The Last Jedi" was pretty heavy with female protagonists, I wouldn't have expressed outrage at it, nor start a campaign to boycott the stand alone "Solo" movie.

But this too is the toxic behaviour that Star Wars fans indulged in.

The answer is simple, and can be applied to any "hardcore" fans in general.  They have become so accustomed to being pandered to by their respective franchises, that they have gained an over developed sense of entitlement and ownership of the franchise.  They've grown arrogant in regards to their "knowledge" of the lore behind their fandom, and feel that only they truly know how the story should go, how the characters should be portrayed, and how their universe should function.  They have built up their own canon inside their heads, and feel betrayed when the franchise doesn't do what they see in their heads.

And they act out in toxic ways.

In other words, they are spoiled brats throwing tantrums when they don't get their own way.

Don't get me wrong.  Fans are an important part of a franchise's survival.  Star Trek is a great example of fans pulling together to save it.  Generally, in the early days of a franchise, fans are essential- as they are the primary source of revenue earned by it, and it's greatest lobbyists.  It's later in a franchise's cycle that fans can- and often become toxic, and prove to be a detriment to it.

Will they kill it?  Unlikely.  But they will push things to a point where the studio and performers will decide to avoid all of the controversy stirred up these toxic fans, and shelve the franchise until a time when more moderate fans will be able to appreciate it's return.

With the recent fan reaction to "The Last Jedi", and their campaign against the "Solo" movie, the Star Wars franchise is starting to near that point.  Soon, we won't have any more Star Wars movies.

And Star Wars fans will have themselves to thank- and blame.