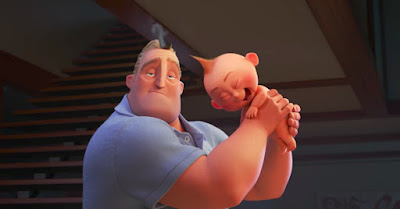 Is 14 years too long between movies? Back when The Incredibles came out, there was no MCU, so Pixar's super-hero flick was the biggest and most, well, incredible, depiction of a comic book put on the silver screen.

Nowadays, there's a new super-hero movie out every few months, and visual effects are at the point where the four-colour world of comics can be brilliantly realized. Doesn't this hurt the impact of an Incredibles sequel.

The wife, son and I hit up Incredibles 2 for Father's Day, and I'm happy to say this follow up is every bit as, well, incredible, as the first movie. It's equal parts fun for adults as it is for kids, and for comic-book fans and non fans alike. The humour and action are spot on, and the characters just as endearing, if not more so.

Also, it has one of my favourite scenes of the year when baby Jack Jack takes on a racoon. The whole audience, especially my six-year-old boy, was in stitches. And yeah, I laughed until I almost cried.

Incredibles 2 is a great couple of hours at the movies. Yes, it was well worth the wait, and it's a Good in my book.