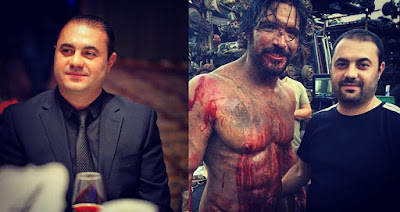 Any day when word hits that our long-time friend, collaborator and brother from another mother John Fallon has a new film in the works is a good day indeed. And today is just such a day!

John announced earlier today that producer Asko Akopyan (above, with star Paul Sloan) has joined the project as lead producer, and that cameras are set to roll in Armenia in early 2019!

The medieval thriller is set to star Sloan (Nation's Fire, Vigilante Diaries) and Mark Lawson (One Life to Live) and is co-written by John and Karim Cheriguene (Horsehead). Heretic also serves as John's directorial follow up to The Shelter, which starred Michael Pare and hit theatres in 2015.

This is wonderful news, as Heretic is a great script and will make an even better film. We in The Basement will follow its development with interest, and anticipate a musically inclined member of the team will be providing some music for this bad boy.