Unbreakable remains one of my Top 20 favourite flicks of all time, and came out when no one took the superhero genre seriously. A modest success, I believe it would have faired much better today, as audiences respect a more grounded and serious approach to a comic-book tale.

Suffice to say I, along with most people, were pleasantly shocked when M. Night Shyamalan's Split turned out to be a closet sequel to Unbreakable, and a pretty damn good movie in its own right. Split made a bunch of money, and now Shyamalan has crafted a sequel to both it and Unbreakable.

A teaser poster for Glass hit today, and it does a great job of not only uniting the two films, but of highlighting the major players, including Bruce Willis's David Dunn, Samuel L. Jackson's Mr. Glass, and James McAvoy's The Beast. Take a boo: 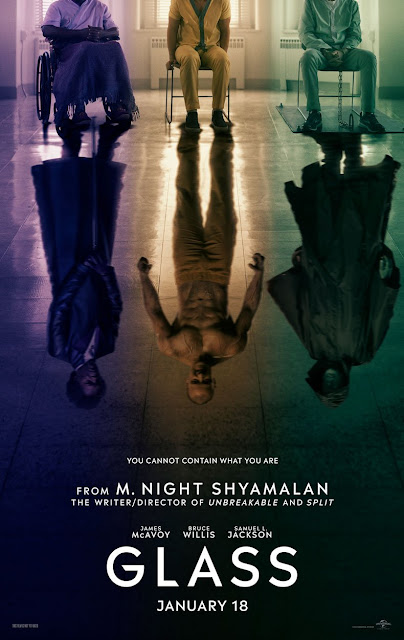 Glass is supposed to take place in an asylum, where all three characters are under scrutiny for believing they are superheroes. I'm sure there's a lot more going on than that, and I can't wait to find out.