I'd honestly forgot a new Terminator movie was headed our way, let alone one that brings back Linda Hamilton as Sarah Connor, but Shawn sent me a pic of Hamilton on set and I was like "oh yeah, right."

So why not post said pic of Hamilton as Sarah Connor in Terminator 6? Why not indeed! 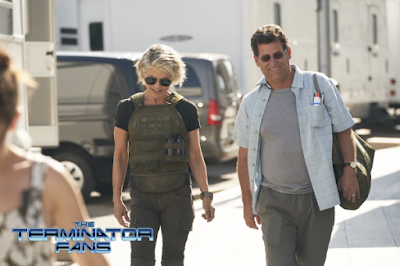 Terminator 6 also brings back Arnold Schwarzenegger as the T-100, and it ignores everything that happened after Terminator 2: Judgment Day. So this sequel, which hits theatres Nov. 22, 2019, is kinda pulling a Halloween.

I don't know if I really want another Terminator movie, especially after how bad they've been since T2, but that's the world we live in nowadays, so I'll reserve judgment until I see some footage, which is obviously a long ways off.