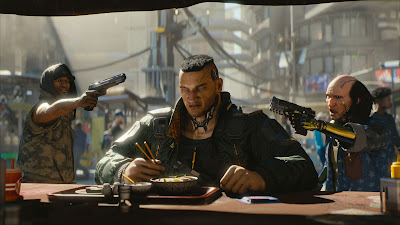 Back in the day, we had a segment on the show called Game Time with Greg. Greg was a hard-core gamer, who could play three video games at once AND fill us in on all three while he played. No bullshit.

We've not shared much from the world of video games since the Game Time era. Not because Shawn and I aren't players, we're just not hard-core players like Game Time. We do enjoy a good session in front of the Xbox and PS4 though.

This fall is shaping up to be a good one for gamers. Red Dead Redemption 2 hits and, although a release date hasn't been confirmed, there's a good chance Cyberpunk 2077 will drop before year's end as well.

From the makers of the Witcher series, this is an open-world RPG set in a Blade Runneresque future where cybernetics are a thing and crime and poverty run wild. This is a sandbox and multiplayer game the creators say is not a shooter.

Look at me, being all gamer lingo-ey and shit.

Check out this trailer, which doesn't offer a look at gameplay, but looks super sweet nonetheless:

Even as a casual gamer, I'll give this a go. My wife is the big gaming nerd in our family, so I'll likely convince her to write a few words on Cyberpunk 2077 when it comes out.