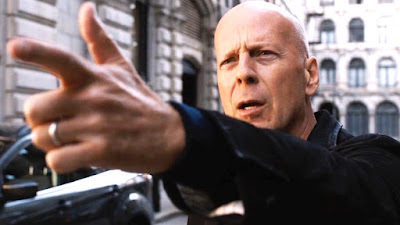 People hated the latest spin on Brian Garfield's 1972 novel from the minute it was announced. They didn't like the idea of Eli Roth directing, and didn't get too excited when Bruce Willis took on the lead. And, when the trailer hit, they didn't like the tone, saying it was too light and action-witty, a phrase I just made up.

To me, the dislike for Death Wish is further proof movie fans are incapable of liking anything, and prefer to bitch and complain as much as possible, about anything. Yes, I used anything twice in the same sentence, wanna fight about it?

Yes, I enjoyed the hell out of this Death Wish.

Is the movie perfect? Far from it. Is the tone a bit off, jumping from serious to action-witty (feel free to use it) and back again, frequently? Yuppers. Do I care about shit like that? Nope.

All I wanted to see was Bruce Willis shoot some people who had it coming, and say a few funny one liners. That's exactly what I got. Colour me happy. And I got to drink beer while doing it. A perfect night in my book (watched it on Sunday, for the record).

If you're in the mood for an hour and 45 minutes of pure, and often violent, entertainment, this is the flick for you. All it lacked was some boobies. But you do get to oogle Leonardo DiCaprio's latest squeeze, so that's something.

Yeah, I'm giving this a Good. Watch it, unless your too pretentious for mindless fun like this.