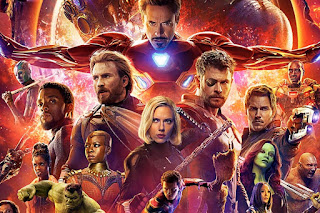 I don't know what impressed me more about Avengers: Infinity War -- the fact I have to rethink my Top 10 Favourite Movies of All Time list, or Scarlet Witch's cleavage. A statement both bold and crass, but true.

In all seriousness, this is truly an epic film that delivers on every level. It's exciting, funny, emotional and, for the super-hero genre, complex. There's not a boring moment in it, which is quite a feat given the long running time. Think The Empire Strikes Back of Marvel movies, and you kinda sorta get the point.

Every character gets his or her moment to shine, some more so than others. How they fit everyone in, and didn't cock things up, is a miracle. Thank Jebus they didn't.

To sum it up, this is the best super-hero movie ever made, and a perfect culmination of the Marvel Cinematic Universe's first 10 years. There are those out there who tire of these movies, and the influx of comic-book films hitting theatres. But I have no doubt we'll get another 10 years of Marvel movies for sure. If they are equally as great -- yes, GREAT -- as Infinity War, then I'm on board.

Suffice to say, this rates a Good. And thanks to Elizabeth Olsen for putting up with me. I know you're getting tired of that costume, even if some of us are not ;)