Why It is so good 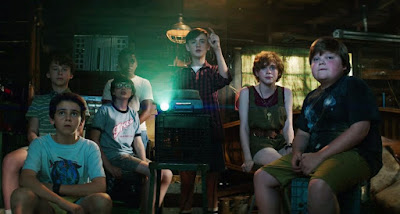 By now, many, many people have seen the big-screen adaptation of Stephen King's It. To the tune of $117 million -- the largest opening for a horror movie ever.

There are a lot of reasons for It's success (see what I did there?). It's arguably King's best-known work, and most liked. So that plays a big part. And the movie was well marketed by Warner Bros. and New Line Cinema.

But there are other reasons for the success, not the least of which is that it transcends being just a great horror movie and is actually, simply put, a great movie. Pure and simple.

They started with a good script that takes, in my opinion, the most interesting part of the book -- the time when the characters are kids -- and focuses on that. And, aside from a few minor tweaks, like setting the story in the 80s, they stay faithful to the source material.

It should be noted that the 80s are hot right now, so the whole retro thing works in the movie's favour too.

Then they cast the movie to perfection. Finn Wolhard, Sophie Lills, Jaeden Lieberher and the rest of the young cast are actually teenagers, and they own their parts. It has some of the best acting this side of any Oscar bait. AND, because we like these kids, we're invested in what happens to them.  So we're invested in the movie.

It also helps make the film a coming of age story, with the kids overcoming their fears and moving into adulthood, which gives It more depth than a simple slice and dicer.

This is probably a good time to note that many 80s horror movies had kids as the heroes, so once again, that whole retro thing comes into play. Ditto a likeness to the hit Netflix show Stranger Things.

Lastly, director Andres Muchietti knows how to make a good horror movie. Yeah, there's blood and guts and jump scares, but he never lets the carnage get in the way of this being a fun ride. He gives the scripts humour and humanity equal play, so there's time to breathe and brace ourselves for the next nightmarish onslaught.

It was made by people and a studio who had confidence in the material. More studio execs need to look beyond it's success to why it happened, and learn from it. If they do that, we'll get more such films in the future, horror or otherwise.