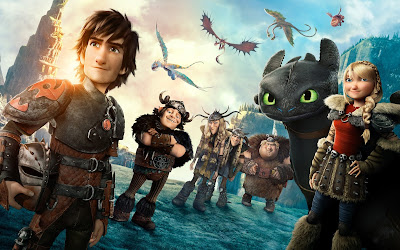 Before there was Pixar producing phenomenal computer animated movies, there was Dreamworks.

"How to Train Y our Dragon 2" isn't a bad movie.  It's not what I would consider one of Dreamwork's better pieces, but it's not a bad movie.

I really enjoyed the first one, but couldn't quite focus on this installment in the series.

The visuals are fantastic.  I really liked how they actually put thought into how the characters would look as they aged.  They look the age they're supposed to be.  Also the environmental design is amazing.  Great lighting and shading, and wonderful texturing.  A visually beautiful film.

The camera work helps to enhance the look.  A great blend of standard steady shots, with swooping angles and movements.

The voice acting was also pretty good, too.  The voices matched the personalities of the characters perfectly.  I also really liked the characters as well.  They were interesting and unique from each other- with each character having their own "moment" to shine as well.

Unfortunately, the story wasn't as engaging for me as the first film.  I liked the addition to Hiccup's backstory regarding his mother- but the rest of it was pretty much just a repeat of the original story.  It made it hard to focus on what was happening.  I even found myself comtemplating what sort of thoughts a cheesy poof might have in its bag.

In fact, I found the short film "Dawn of the Dragon Racers" in the special features more interesting story-wise.

"How to Train Your Dragon 2" would be good for a single viewing- but sad to say, not much more than that.  I'm going to have to put it in "The Bad".