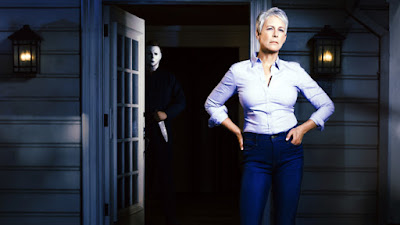 The Halloween franchise is a strange universe indeed, having been retconned and reimagined several times in its 39-year history.

Well, today big news hit about another huge twist in the franchise -- Jamie Lee Curtis will return in the next Halloween film . . . and she's playing Laurie Strode!!

Of course, Curtis created Laurie in John Carpenter's 1978 classic, and played her again in Halloween 2 in 1981 and then brought the character back for Halloween: H20 and Halloween: Resurrection, where the character was killed off.

But this new film, which is directed by David Gordon Green and written by Green and Danny McBride, says fuck that. This is a direct sequel to Halloween 2, which means Curtis and Laurie are safe to return.

Some have already started pissing and moaning about this, but to them I say shut the fuck up. It's happening, so embrace it and hope for the best. These are movies, nothing more, and as long as they do a good job with this Halloween, I'm all for it.

John Carpenter is on board as executive producer and has promised to compose music for the film, which has me even more excited. My ass will be in a theatre seat when this Halloween hits Oct 19, 2018, just in time for the first film's 40th anniversary.