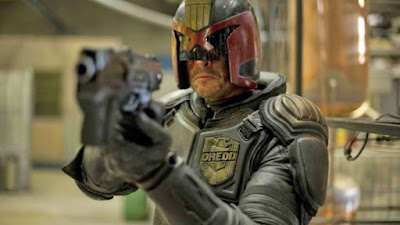 The fact the 2012 big-screen Judge Dredd reboot, appropriately enough called Dredd, didn't take off is a damn shame. Damn. Shame. It remains one of the best comic-book movies ever made, and a damn fine sci-fi/action flick. Damn. Fine.

Fortunately, the film has developed a cult following. This is largely due, I would assume, to Karl Urban's spot on portrayal of Judge Dredd. And all the cool action.

It was announced in May that the Judge Dredd universe will live on in the form of a TV series called Judge Dredd: Mega City One. Little is known about the show, other than it will feature the Judges who protect Mega City One. The big question is will Judge Dredd be in it and, if so, who will play him?

Well,  Urban was speaking with TrekMovie earlier, and let drop that he's open to reprising the role of Dredd for the TV series as long as "they write the material, and give Dredd something to do, and give him a function."

Hey, sound like he's on board as long as the part is well written!

With TV outpacing feature films in terms of quality, I think a Dredd TV series is a great thing, especially if it can continue the fine work started in the 2012 film. We'll keep you posted on this as the series develops.