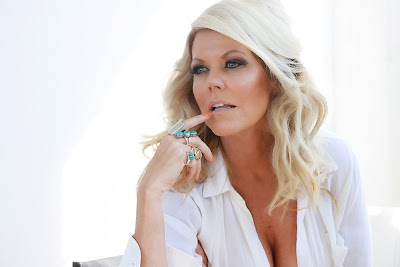 We've entertained the beautiful and talented Tracey Birdsall twice before in The Basement. First with a print interview here on the site, and later on the podcast/radio show. She's been a great interview both times.

As we reported last week, her new flick Rogue Warrior: Robot Fighter hits VOD next week. So it was only fitting that we'd have her back once more to share a some further details about this sci-fi flick.

This wasn’t your first science-fiction but it’s your first lead in one. Is that correct?

What attracted you to the project?

There’s everything to like about it. Sci-fi/action/character arcs… robots… it was a very attractive project to say the least.

What came first, the character or the script?

The script, for sure. Our job, as actors, is to bring that character to life. Sienna morphed and grew throughout her development, but it all started with the script. As an actor, bringing that character on the page to life is the very most exciting part of the journey.

Sci-fi films usually come with a deep, underlying message – does yours?

It does! This is a very character-driven story, with science fiction as a backdrop… a very human journey.

How was it getting about in that outfit? Was it uncomfortable?

Yes, it was! The good part is that you only question the costuming and the props prior to filming. When the camera is rolling, it’s all part of what makes it real. You never question - “what is” during filming. Actually, the most uncomfortable part was the extreme heat we were filming in. Leather corsets and the like are not conducive to that environment, but it did “feed” the character. It just “is”.

Did your director require you to do weapons training or any other sort of training in order to play
Sienna?

I grew up shooting guns and bows and arrows and fighting. I was the youngest of three daughters to a very manly man! As the tomboy in the family, I was exposed to all of the aforementioned at a young age. My dad taught me to shoot, to fall, to fight, and to run… There was a stunts coordinator on set, but I was up to the task.

Did you do any research of your own into A.I, or similar topics, before filming?

I was the daughter of Ronald Birdsall, the founder of Powercon – the largest power electronics
convention in the world during my youth. I was exposed to robotics and artificial intelligence from a very young age. I’ve researched it, been aware of it and curious by it, since my youth. This was definitely part of the appeal to doing the project.

How long ago was it shot?

It’s been about two years ago now that we were shooting. It shot over about a year and a half,
however, as we shot additional scenes up to a year after finishing principle photography.

Are you excited for the VOD release? How will you celebrate?

I’ve enjoyed every step of the journey. VOD and ITunes are just the next step. There will be no
celebration, as we are deep in additional scenes shooting for The Time War. Creating is the most enjoyable part of the journey…