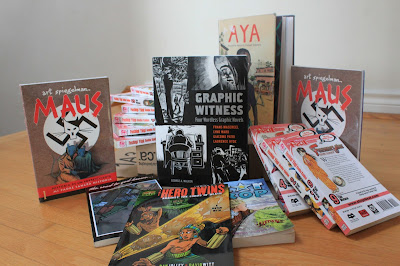 We live in an age where comic books are a major source of television and cinematic entertainment.

In light of this, I would like to submit my "Top Four List of Graphic Novels to Adapt"  For this list, I'm going to focus on stand-alone stories that have no connections to mainstream comic book series (ie- no Batman story arc, no Marvel "What If?" stories, etc).

1.  "Maus" & "Maus II" by Art Spiegelman.  This story follows the experiences of Spiegelman's father during the Holocaust.  It is a powerful, poignant, and moving story that would be perfect for a mature animated feature.

2.  "From Hell" by Alan Moore and Eddie Campbell.  I know it's already been made as a less than stellar Johnny Depp film- but I put it on my list, because it is a fascinating graphic novel about Jack the Ripper.  Instead of a movie, though, I would be inclined to do it as a mini/maxi series on TV.

3.  "Trillium" by Jeff Lemire.  This is a well written Sci-Fi story about two lovers trying to cross time to be together... and possibly save the world.  This would also be great as a TV mini-series.

4.  "Apocalypse Nerd" by Peter. Baggeman.  A fairly short read about a small group of nuclear apocalypse survivors doing their best to adapt to the new world.

So, there we have four graphic novels that I think should be adapted.  What do you think?