The Animated Addict: "Batman: Return of the Caped Crusaders" (2016) 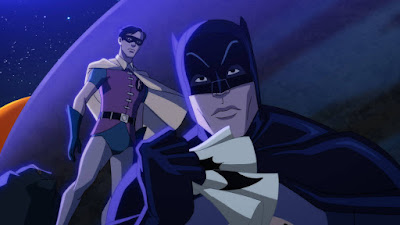 Mike S back with another animated review!  This time, in honor of the late, great Adam West, I'm going to be discussing DC's 2016 release, "Batman: The Return of the Caped Crusaders"!

When DC relaunched their comics under the banner of "The New 52", they produced a few series that weren't part of the new continuity.  One of them was "Batman '66"- which was based on the old 1960's Batman TV series starring Adam West (as Batman/Bruce Wayne), and Burt Ward (as Robin/Dick Grayson).  If you get the chance- check out a few of the issues, they're quite fun and really encapsulated the spirit of the show.

The comic was (to DC's surprise, I'm sure) one of the more popular ones they had since the relaunch.  So, it was only a matter of time before DC would capitalize on that popularity with an animated movie (which I think they do a better job with than most of their live action ones).

Thus ends the origin story of "Batman: The Return of the Caped Crusaders".

After foiling a heist being pulled off by Catwoman, The Joker, The Penguin, and The Riddler, Batman experiences a "change" in his life- and it's up to Robin to figure out what happened, and how to help his mentor.

Before Gotham is destroyed...

The story is a nice throwback to the original TV show: unique, interesting, and even exciting with all of the humour and charm it had back then.  I was quite engaged throughout.

Adam West, Burt Ward, and Julie Newmar all return to reprise their iconic roles of Batman, Robin, and Catwoman.  They were able to slip into the characters effortlessly.  At times, I had a hard time remembering that the film came out in 2016, rather than the 60's.  Credit also to Jeff Bergman, William Salyers, and Wally Wingert as The Joker, The Penguin, and The Riddler.  They all did a great job with the roles.

With the relaunch of the DC comics, the animated movies became a bit more "realistic" in terms of the art style used for the animation.  This feature was not different.  I really liked the look, and the attention to detail the animators gave it.  They even made sure that the little "ruffle" where Batman's cape is tied at the front of his throat was there- and the blue "eyebrow" lines!

All in all, "Batman: Return of the Caped Crusaders" was a very enjoyable dose of nostalgia and fun.  I'm really looking forward to October when the sequel, "Batman vs Two-Face" (with William Shatner as Two-Face) comes out.

I'm giving this feature a spot in "The Good"!