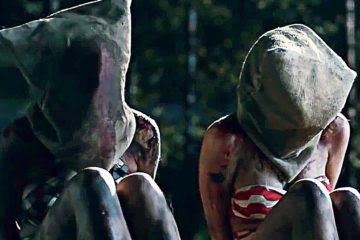 In the summer of 1960, four teenagers were brutally murdered on the shores of Finland's Lake Bodom. The killer was never caught. True story.

Taneli Mustonen's movie is an artistic, and very meta, take on the slasher genre, using these real-life murders to tell a twisted and gruesome story of revenge. But I don't want to say too much, as the less you know about Lake Bodom the better.

That being said, I dug the shit out of this film. For one, every frame is a work of art that deserves to be hung in a place of honour in your home. This is the best looking horror movies to come down the pike in a long-ass time. Literally, every fame is gorgeous to behold.

Fortunately, the script holds up too. There's one twist after another, leading up to one more twist that had this critic on the edge of his seat. Toss in some stellar performances, and the boobage of Nelly Hirst-Gee, and you've go yourself a great night at the horror movies!

I don't want to say too much more, as the less you know about Lake Bodom going in the better. But be advised that this flick is the real deal. And kudos to Shudder for getting the exclusive on bringing this brilliant genre movies to our shores. You like horror? Then watch Lake Bodom!