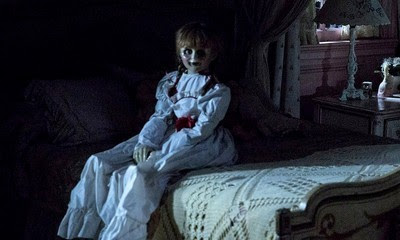 We all know there are a lot of bad horror movies out there that make some serious bank. Horror fans love the genre, and will pretty much go and see anything because they're starved for new content, inadvertently creating hits.

Such was the case with last year's superior Ouija: Origin of Evil, which kicked the original Ouija's ass all over the place. And now we've got Annabelle: Creation, which stomps on 2014's Conjuring spinoff Annabelle in admirable fashion.

While Annabelle was a largely scareless void filled with stilted acting, Annabelle: Creation is old-fashioned scary, with the same kind of extended fright sequences that made The Conjuring and its sequel so damn fun and, well, scary.

Plus we've got some solid performances, especially from youngsters Lulu Wilson (who also killed it in Ouija: Origin of Evil) and Talitha Bateman. They carry the movie, and outshine their older colleagues, including the usually reliable Anthony LaPaglia and Miranda Otto.

But we don't go to these movies for Oscar winning performances. We go for scares! And, as I've already said, this flick has them. Lights Out director David F. Sandberg delivers the goods, including a scene that is one of the best in The Conjuring universe. There's special effects, but for the most part, the horror here is kept basic, relying on what you're not seeing more than what you see.

I review movies from an emotional standpoint, and rarely call on my film school background, because most audiences don't give two shits about lighting, cinematography, subtext etc. BUT the one thing that holds Annabelle: Creation back IS the script. There's a little too much third act exposition, and aside from the two young leads, the characters aren't well written enough to become too invested in what is going on.

We dig The Conjuring movies because we really like the characters -- especially Ed and Lorraine Warren -- so we care about what is happening to them. We don't here, so the movie isn't able to rise much above the level of a fun and scary ride, which it is.