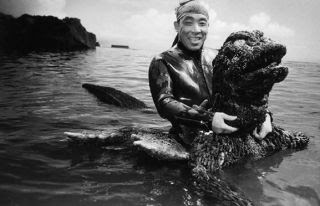 Before CGI revolutionized special effects, there was the era of the Man in Suit. That's right, many times when there was a monster on the screen, it was played by a guy wearing a costume.

Hands down the most famous Man-in-Suit monster is Godzilla. And on Monday, the guy who played him in 12 films -- from the original Godzilla in 1954 to Godzilla Vs. Gigan in 1972 -- passed away.

For this movie nerd, Nakajima is a bonafide icon, having brought the King of the Monsters to life, creating one of my childhood heroes. That's right, a guy in a ready-mix concrete monster suit was my hero. Wanna fight about it?

I know special effects have come a long way from Mr. Nakajima's days, but they lack the charm and character of those early Godzilla movies. Sure, Godzilla looks photo real in the new flick, but something just isn't right about him now . . . and never will be again.

RIP Haruo Nakajima. You will be missed, but the great character you brought to life lives on!