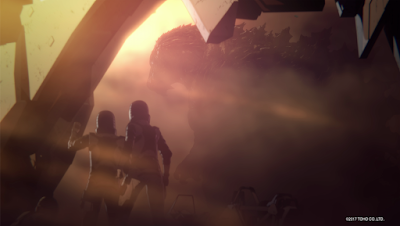 Shawn and Mike S have given me the gears for years about not being a fan of animation. Shawn loves the animated DC movies, and by now all of you should be familiar with Mike S's Animated Addict columns here in The Basement.

Me? I have a hard time getting emotionally engaged in a story that's presented as a cartoon. Loved 'em as a kid, but not so much in the last 25 years or so. Cartoons leave me cold.

See, Netflix has gone all in when it comes to animation, with a dozen animated flicks headed our way. And one of them features my favourite monster: Godzilla!

The new movie, by way of Toho Animation, tosses the King of the Monsters into the far future, where humans attempt to reclaim an Earth that's been lorded over by Godzilla for some 20,000 years. The movie hits Japanese theatres later this year, then Flix of the Net in North America.

Want a taste? Scope out this trailer . . . which is all in Japanese. Hey, we work with what we got here in The Basement.

Yeah, I'm all over this mofo. My ban an animation is at an end!!