The Animated Addict: The Transformers: The Movie (1986) 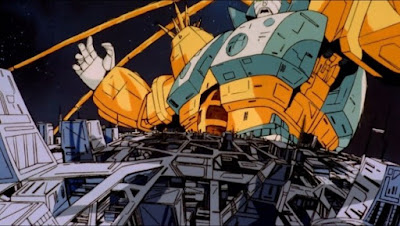 Mike S here (again) bringing you another animated movie review!  This time, I'm travelling back to 1986, when "The Transformers: The Movie" was released.

The Decepticons and Autobots have been waging war for years.  Just as things look bad for the Autobots, things get worse with the arrival of... Unicron- eater of planets.  It's up to the remaining Autobots to defeat Unicron and a new, improved Megatron!

Anyways.  "The Transformers" TV cartoon was one of them.  In fact, they were one of the most popular cartoons- so much so that they even got the feature length film I'm reviewing.

Long-time fans of the franchise (especially those that were in their teens back in the 80's) will have fond memories of this movie.

But does it hold up?

Story-wise?  Yes.  The premise and plot are still strong, engaging, and exciting.  While the characterizations aren't as strong compared to modern cartoons and anime, they are still entertaining as well.

The voice acting is still quite strong in terms of performance.  Helps that they had such strong actors in many of the roles:  Orson Welles as Unicron, Leonard Nimoy as Galvatron, Erik Idle as Wreck-Gar, Robert Stack as Ultra Magnus, Casey Kasum as Cliffjumper, and obviously Peter Cullen; Frank Welker as Optimus Prime; Megatron respectively.

The animation, while still enjoyable, is unfortunately a little dated- and is an obvious product of the 80's.  This wasn't a problem for me, but might be a bit of a let down for younger viewers

And the music.  Oh, the music.  Such 1980's rock and roll awesomeness.  I loved it.  I don't know of many fans from the 80's that didn't have the soundtrack at some point.  While I'm sure newer fans would find it a bit cheesy, I loved it.  Just loved it.  I even wound up singing along to the Transformers theme during the end credits.

I had fond memories of watching this movie as a teenager, and I still found "The Transformers: The Movie" enjoyable.  Long-time fans will certainly enjoy it as well- though newer fans might only find it amusing as a cheesy curiosity.  Because of this, I'm going to give it a spot in "The Bad".